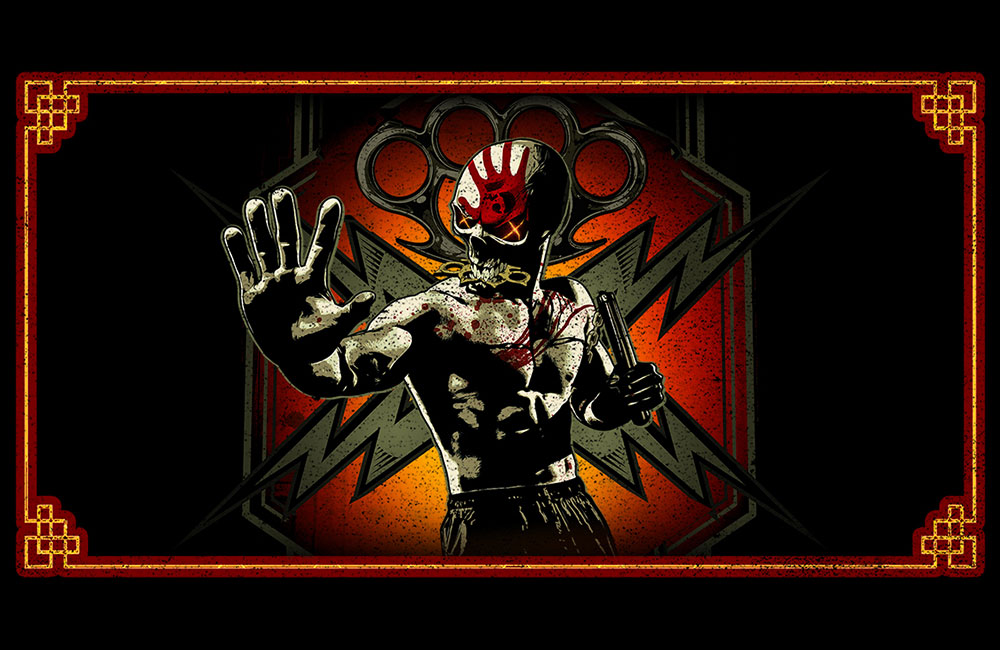 LOS ANGELES, CA, JULY 23, 2019: Currently on the road this July for a mini-series of summer shows and festival dates, FIVE FINGER DEATH PUNCH have announced the launch of a U.S. Fall arena headlining tour.

Co-produced by LIVE NATION and FRANK PRODUCTIONS, the trek will start on November 1 with two special kick off shows in the band’s hometown of Las Vegas on November 1 and 2 at THE JOINT at Hard Rock Hotel & Casino. Multi-platinum Canadian rock band Three Days Grace, global rock sensation Bad Wolves and newcomers Fire From The Gods will join 5FDP on the Fall tour. Fan pre-sale and VIP presale will go up on Tuesday, July 23rd at 12 noon EST. General tickets will go on sale July 26 at 10:00am local time. For tickets, VIP offerings and more info please visit: www.fivefingerdeathpunch.com.

CITI is the official presale credit card of the tour. As such, CITI cardmembers will have access to purchase presale tickets beginning Wednesday, July 24th at 10am local time until Thursday, July 25th at 10pm local time through Citi EntertainmentSM. For complete presale details visit www.citientertainment.com.

Says FIVE FINGER DEATH PUNCH guitarist Zoltan Bathory about the lineup of the tour: “People always say ‘Rock will never die,’ but for that to be actually true it’s important to have successful breakout bands that create a healthy scene. A scene that can sustain everything from arena headliners to the experimental and the underground. We always understood this so we have been actively curating and giving a platform to bands we think are great and have a chance to make it to the next level – so we took out NOTHING MORE who got two number one hits and got nominated for multiple GRAMMYs, then FROM ASHES TO NEW who ended up landing several Top 10 singles. Next we introduced BAD WOLVES who are now doing amazing and have three, #1 hit singles. On this upcoming tour we are bringing FIRE FROM THE GODS who we think will be another important band for the future of this genre. As for FIVE FINGER DEATH PUNCH the band is better than ever, firing on all cylinders so we are really looking forward to this tour and our next chapter.”

Global chart-toppers Bad Wolves are coming fresh off their third #1 single in a row with “Remember When” which tells the haunting story of lead singer Tommy Vext and his incarcerated twin brother. Bad Wolves are currently working on their sophomore album to Disobey (due out this Fall) after making a name for themselves with their multi-platinum hit single “Zombie” in 2018 and winning over the hearts of rock fans everywhere around the globe with their explosive live show. Fans will get a first taste of the new album when the band drops their first new track “I’ll be there” this Friday, July 26 which will be available for streaming and download on all digital platforms.

Newly signed to Eleven Seven Music, up-and-coming rockers FIRE FROM THE GODS will make their arena debut on the tour. Hand-picked by 5FDP, they will kick off the tour in conjunction with the release of their sophomore album, American Sun available for pre-order this Friday, July 26 HERE. Check out a clip from their first single, “Truth To The Weak (Not Built To Collapse),” HERE.

5FDP will donate a portion from every ticket sold on the tour to the GARY SINISE FOUNDATION which honors America’s defenders, veterans, first responders, their families and those in need. This marks a continuation of the relationship 5FDP started with the foundation when it was named beneficiary of the proceeds from their collaboration hit single “Blue On Black” which has been dominating the Rock radio charts this Summer, holding the #1 spot for four consecutive weeks. It features the legendary Brian May, as well as two of the biggest names in country and blues rock, Brantley Gilbert and Kenny Wayne Shepherd. Titans in each of their respective genres, the artists came together to merge country and mainstream rock to re-create the classic song (originally recorded and co-written by SHEPHERD) and to take Country Rock to the next level. “Blue On Black” is now one of the Top 10-Selling Rock Songs of 2019, along with Queen, Imagine Dragons and Panic At The Disco. The song was mixed by Kevin Churko (Ozzy Osbourne, Shania Twain, Disturbed) and is available HERE. Check out the official music video.

In 2019, FIVE FINGER DEATH PUNCH also surpassed 3 billion streams worldwide and the multi-platinum group continues to shatter records across the board. See all show dates below.

About Five Finger Death Punch
2018 was a massive year for FIVE FINGER DEATH PUNCH who became the #1 most-played artist on U.S. Rock Radio in year-end radio reports. The group which Billboard described as “a revitalized band with a renewed focus,” released their seventh studio album, AND JUSTICE FOR NONE which debuted at #4 overall on the Top 200 Chart and KERRANG! hailed as “…an album that delivers, ticking the boxes of what a modern metal album should be.” AND JUSTICE FOR NONE has generated 225 million U.S. on-demand streams, over 360,000 U.S. digital song sales and became the #1 streaming Hard Rock/Heavy Metal Album of 2018. It marked the group’s fifth consecutive Top 5 album release. The album also had four #1 placements on other charts including: Top Digital Albums, Top Rock Albums, Top Hard Music Albums. With their 2018 Summer and Fall tours combined, the band donated over $250,000 to charities just in one year. Purchase or stream AND JUSTICE FOR NONE by clicking on the link. Five Finger Death Punch have amassed over 3 billion streams to date. Their eight studio album is anticipated to drop in Winter 2019/20.

About Three Days Grace
Since 2003, Three Days Grace, the internationally acclaimed and multi- platinum certified Canadian band, has staked a spot among the hard rock vanguard, breaking records, toppling charts, moving millions of units worldwide. Their song “Infra-Red” off the band’s most recent album, 2018’s Outsider, earned them their 14th #1 single on U.S. Billboard’s Mainstream Rock Songs Chart, breaking the all-time record for most #1 U.S. singles at Active Rock Radio ever. In 2015, Human marked the group’s second straight #1 slot on the Billboard Top Hard Rock Albums Chart as well as their fourth consecutive debut in Top 20 of the Top 200. It spawned two #1 singles “Painkiller” and “I Am Machine,” signaling their 13th overall and 5th consecutive number ones on the U.S. Active Rock Radio chart. Moreover, the four-piece consistently averaged a staggering 3.9 million monthly listeners on Spotify—remaining one of the most listened to rock bands in the world. In 2012, Transit of Venus soared to the Top 5 of the Top 200 and garnered a nod for “Best Rock Album of the Year” at the Juno Awards. The seminal One-X[2006] notched an RIAA triple-platinum certification as Three Days Grace [2003] was minted platinum and Life Starts Now went gold. To date, their veritable arsenal of number one songs includes “Chalk Outline,” “The High Road,” “Misery Loves My Company,” “World So Cold,” “Good Life,” “Break,” “Never Too Late,” “Animal I Have Become,” “Pain,” “Just Like You,” and “Home. The band was most recently nominated for three 2019 Juno Awards, for “Album of the Year,” “Group of the Year,” and “Rock Album of the Year,” and is currently on tour supporting Disturbed.

About Bad Wolves
Consisting of vocalist Tommy Vext (ex-Divine Heresy), drummer John Boecklin (ex-Devil Driver), guitarist Doc Coyle (Vagus Nerve, ex-God Forbid), guitarist Chris Cain (Bury Your Dead), and bassist Kyle Konkiel (ex-In This Moment), BAD WOLVES rapidly became the most successful global breakout rock band of 2018. The band’s debut album Disobey was released in May 2018 through Eleven Seven Music featuring the lead single of The Cranberries’ cover track, “Zombie” that quickly shot to the top of rock, metal, mainstream and alternative charts around the world. It was released in honor of Dolores O’Riordan with a portion of the proceeds from the track going to her three children. In June 2018 the band presented them with a first check over $250,000.00. Bad Wolves’ follow up singles “Hear Me Now” and “Remember When” have both reached #1 at Active Rock Radio as well. The band is currently working on their sophomore record due out later this year.

About Fire From The Gods
For some artists making music isn’t a choice, it’s fueled by something larger than themselves. This is undoubtedly true of Fire From The Gods whose first full-length album on Eleven Seven Music, American Sun, sees the band as the voice of unity, inciting the importance of social consciousness in crucial times. “With this record what we’re trying to drive home is that our differences and where we are from doesn’t need to define who we are moving forward,” Channer explains. “I’m telling the story from my perspective, but it’s a story that people from all walks of life can relate to in the sense that we all face the same challenges… and the only way to conquer them is if we face them together.”